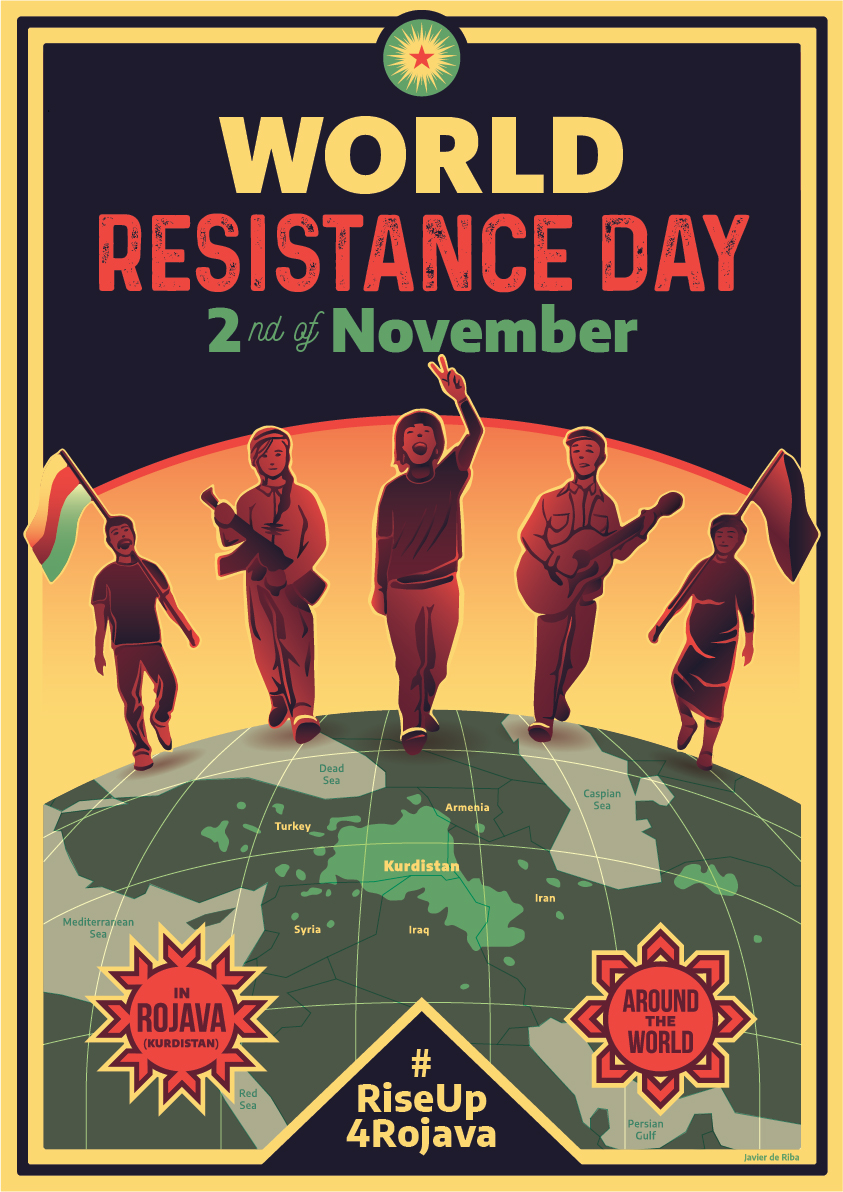 The revolution in Northeast Syria will prevail, fascism will be smashed!

At 4pm on October 9th, the Turkish occupation army and its Islamist allies began their long-prepared war of aggression against the liberated areas of northern Syria.

At four o’clock sharp in the afternoon, bombs rained down on people in towns and villages on the border. Jihadist militias began their advance under the leadership of the Turkish army and tried to penetrate into the border area. Turkey is talking about a “military operation” aimed at “securing the border” and establishing a so-called “peace corridor”, but the fact is that the Turkish army and the Islamist mercenaries under its command are concerned with nothing less than the occupation of the mostly Kurdish populated entire area along the Turkish-Syrian border. The regime in Ankara speaks of the “fight against terrorism” and emphasizes that their war of aggression is not about the war on the civilian population, but indiscriminate bombing of civilian settlements, looting and mass deportations of hundreds of thousands of people, arbitrary executions and the brutal abduction of hundreds of civilians speak a different language. The further the war against northern Syria progresses, the more it becomes clear, what Erdogan is really about, namely ethnic cleansing through the violent expulsion of millions of people and the long-term demographic change of the entire region.

In the north of Syria, in the shadow of the Syrian civil war, a revolutionary and democratic social project has thrived in the past seven years that has been a thorn in the side of the region’s powers and imperialist states from the very beginning. The societies of Northeastern Syria established their own self-government and created an oasis of peace, based on the equal coexistence of all groups of the local population, the liberation of women, an ecological economy and radical democracy. The Democratic Federation of Northeast Syria has become a living example of a peaceful and democratic future for the Middle East, beyond local despotism and foreign rule. Finally, the defense forces of the peoples of northeastern Syria, the Syrian Democratic Forces, succeeded in smashing the last remnants of the Turkish-based IS caliphate.

Today, Islamist militias, most of them fighters of the Islamic State and al-Qaeda, are advancing again with the Turkish occupation offensive in northern Syria and spreading fear and terror. The states of the International Coalition, above all the United States of America, have paved the way for the Turkish war of aggression with their coordinated withdrawal of troops. They gave away their former allies to destruction and sacrificed the peoples of northeastern Syria to their filthy interests. The states of the world have agreed to close their eyes while the Turkish occupation army and its jihadists are committing a genocide with NATO weapons.

But we will not stand by and witness in silence the massacres that take place in the eyes of the world today. Only a broad and resistant anti-war movement will stop this war. Just as people were pouring worldwide into the streets against the Vietnam War or the US invasion of Iraq in 2003, the conscience of humankind must rise in revolt today in the face of the Turkish barbarism in northern Syria.

On November 1st, 2014, millions of people around the entire world took to the streets for a day to express their solidarity with the heroic resistance of Kobanê. We call for this year’s November 2nd to be a day of global resistance against the Turkish War of Aggression, to break the normal situation and to paralyze life. Participate in creative and diverse actions of civil disobedience, demonstrations, and many more, and take over the streets and public spaces.

As long as the killing continues, the resistance must not stop.