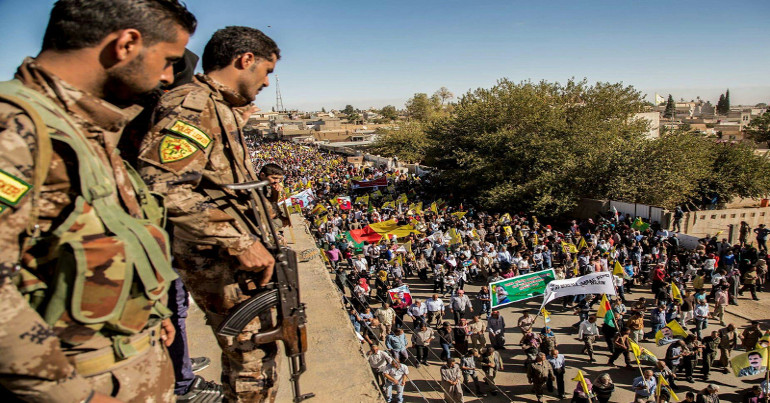 An internationalist volunteer has spoken to The Canary about joining the armed resistance against the Turkish invasion of Afrin in northern Syria last year.

In 2012, a revolution began in the majority-Kurdish region of Rojava in northern Syria. People organised themselves into communes, declared autonomy, and began practising stateless direct democracy. The revolution, however, was under threat from the very beginning, and has faced invasion by Daesh (Isis/Isil) and Turkey. Hundreds of women and men from around the world have volunteered to join local people in defending the revolution.

Originally from the US, Argeş travelled to Rojava in 2016 to join the Kurdish-led People’s Protection Units (YPG) in their fight against Daesh in Raqqa. He joined Rojava’s social revolution after the liberation of Raqqa.

Argeş volunteered to fight again in January 2018 to help defend the revolution against Turkish invasion. This is the first part of his eyewitness account of the popular resistance against the attack, Turkey’s war crimes, and the complicity of the West.

The Canary: What do you think were the reasons behind the invasion of Afrin?

Argeş: The Turkish state is hyper-nationalist, so they really hate the Kurdish identity [inside Turkey and outside Turkey], and they want to crush it because of the threat it poses to their idea of nationalism – [the idea that] there is no one else [in Turkey] other than Turks.

[The Turkish state sees] the success of this direct democracy that’s being established on its borders [in Rojava] as a huge threat. They want to destroy it.

Another aspect was that there was a snap election – where Erdoğan could secure his long-term powers. It’s an old political strategy. What better way to stoke nationalist support and unity than to engage in a war?

How did the attacks on Afrin begin?

Initially, there was a big troop build-up. The Turkish state started with a little shelling and small arms fire along the border between Turkey and northern Syria. Finally, they prepared massive amounts of troops which were primarily under the name of the so-called Free Syrian Army (FSA). They were mainly composed of Islamist groups: Jabhat al-Nusra, Tahrir al-Sham, and a lot of the remnants of Daesh that had fled Raqqa.

Was Turkey supporting the proxies with drones and air strikes?

In Afrin, they would send the proxies in first. Because if they died, it’s not an issue for the media… because it’s not Turkish soldiers dying.

They would provide [the proxies] with artillery support, drone coverage and air strikes, just like the [US-led] coalition did for us in Raqqa. They had everything provided – logistics, coordination, and they would be backed up by helicopters, armour, Turkish regulars, and some special forces, who would be going in with them.

Behind them you would have the full power of the Turkish army.

Can you talk about people’s response in Rojava to the attack in Afrin?

People in Afrin and the other cantons [of Rojava] saw that the international community was doing nothing, and had more or less left them on their own. There was no [mainstream] media coverage, just radio silence. The people saw that all they had was each other. Demonstrations and marches were organised every day by civil society. Huge convoys of civilians came to Afrin from all over northern Syria, risking everything to link up with people from Afrin and show them that they weren’t alone. As they were coming in, they were targeted by Turkish air strikes. You would even see people demonstrating in Afrin city as artillery and air strikes were coming in around them.

The mothers of the shahids [those who had died during the revolution] came from all over. [On one occasion] they made a huge circle and were dancing; to show that the revolution is not just a fierce fighting revolution, to show the joy and humanity that’s such a critical component to it.

Everyone was putting everything into this defence of Afrin. People were inviting us [fighters] into their homes. If people weren’t fighting, they were out on the streets demonstrating – or preparing food and logistics, helping in the hospital. It was a really popular uprising.

What happened when the proxies pushed into villages?

The brutal reality was this – when they came into a village, they would immediately run wild, looting. They would tear down photos of our martyrs, literally dancing on them and ripping them apart; defacing anything that had connection to Kurdish cultural identity.

The people who were left behind – if they had any connection to the autonomous administration [of Rojava] or the YPG – would be tortured and humiliated. Especially the women comrades. One in particular was captured, her body was mutilated, and she was dragged through the streets naked.

Would the Turkish military have known about these things that were happening?

Absolutely. In a lot of videos, you’ll see the presence of Turkish soldiers. There are even some videos of Turkish soldiers beheading YPG fighters. They wanted to wipe out any support for the Kurdish movement. So they gave these groups carte blanche to do whatever they wanted. The Turkish troops were in the background while these groups were running around [Afrin city] looting and destroying everything, doing retribution killings and kidnappings. The Turks were just sitting in armoured vehicles in the city.

Was there still air support and artillery support from the Turkish military at that time?

Yes: it continued all the way until Afrin city itself was besieged and ultimately fell. And even now, with the resistance that’s continuing, they still provide drone support, air strikes, and artillery. That was there from day one of the invasion and still continues.

Do you think Western states, and the international companies that provide weaponry to Turkey, have a responsibility for what is done with those weapons?

Yes, absolutely. They should be responsible for where the weapons are going. They should know how they’re being used. It’s one thing… to say that, before the invasion, they didn’t anticipate it. But the fact is that they’re continuing to give weapons to Turkey. All of these intelligence agencies that continue to work with these contractors and companies, they all know what is happening on the ground. They know that the Turkish state is using these weapons to support Islamist groups and the so-called Turkish FSA, and that they’re providing the cover for these groups to engage in war crimes.

Tom is part of Shoal Collective, a cooperative producing writing for social justice and a world beyond capitalism. Twitter: @ShoalCollective

By Tom Anderson of Shoal Collective. Article first published by The Canary.