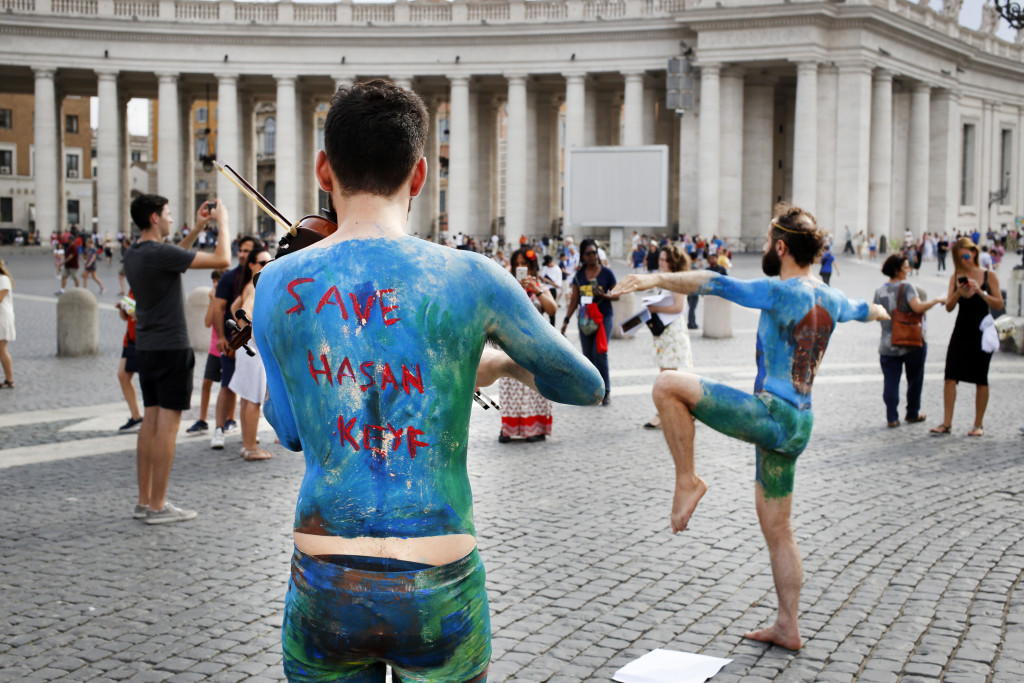 Artists of the group ‘Compagnie bien à vous Armanc Kerborani’ are drawing attention to the planned destruction of the historic city of Hasankeyf. With the support of Zehra Dogan (artist and journalist), the group gave recent performances in Paris at the Louvre Museum under the Pyramid on Thursday, 27 June 2019 and in Berlin at the Pergamum Museum in front of the Gate of Ishtar on Saturday, 13 July 2019.

At the end of the video police intervenes and detained the artists! But they have been released after 2 hours.

More later at: www.hasankeyfgirisimi.net
This is the statement of the artist group Compagnie bien à vous Armanc Kerborani for this performance:

“Located in the region of Kurdistan within the borders of Turkey, the city of Hasankeyf is one of the oldest cities in the world. Built on the banks of the Tigris River, it embodies 12,000 years of human history.

Hasankeyf is home to hundreds of sacred sites and places of worship for Yezidis, Jews, Zoroastrians, Christians and Muslims, testifying to the rich cultural inheritance that this city represents for humanity. Cliffs around the city are spotted with ancient caves that housed churches where some of the first Christians in the world gathered to worship, singing in Aramaic, the language of Jesus Christ. Witnesses to this history, the cave walls are engraved with some of the earliest Christian crosses. In the echoes of these caves, one can imagine that they hear the chants even today.

Right now, the city of Hasankeyf is in danger. Although it is not currently recognized by UNESCO, the city is a valuable site of world heritage. If we do nothing, the city and its fertile lands will be flooded by the waters of the Ilisu dam, planned to operate for fifty years. Is it not ridiculous, that millennia of history will be swallowed up?

In coming to the Vatican, we challenge UNESCO, the institutions and the public to stand against this act of cultural genocide. The city of Hasankeyf is an ancient universal heritage. She welcomed us, cradled us and nurtured our beliefs and our shared humanity. Today, whatever our creed, she is heritage to us all. We cannot stay silent and fail to act in the face of her drowning.

Our art is an INVOCATION!
We invoke Mary, in front of the Pietà of Michelangelo.
We choose St. Peter’s Cathedral, the cornerstone of the Christian Church.
We sing songs of joy to resist, wedding songs of Botan and Yezidi and Aramaic songs.
Resist like the mountains of Kurdistan, which Alexander the Great could not cross.
The water poured from our feet to our heads evokes the city which will be drowned, little by little, before our eyes.

Hasankeyf is our mother, our inheritance entrusted to us by goddesses and mothers of the peoples of Kurdistan – Xatuna Fexra, Xatuna Sitenya and Mary.

Being aware of this, we take action and cry out to the world.
Save 12,000 years old Hasankeyf! Stop Ilisu Dam!

All the best to you…”