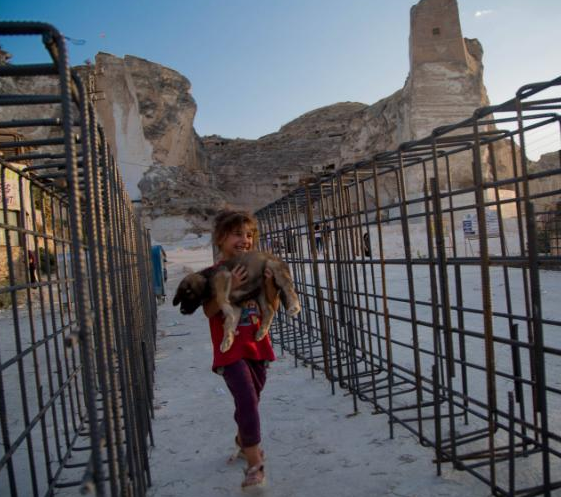 On 14th September 2019 many people from Turkey, Europe and other countries have joined the Global Action Day “Sing, play, paint or do something for Hasankeyf”. Once more they all stated “It is not too late for Hasankeyf” and stood with performances and actions for saving Hasankeyf and the Tigris River which are threatened by the controversial Ilisu Dam Project.

It is urgent to act with all our energy and creativity for the life, outstanding heritage and values in the Tigris Valley because in end of July the Turkish government has started to fill the Ilisu Dam reservoir and it declared to close Hasankeyf for the public on 8th October 2019. It is likely that just few week after 8th October Hasankeyf could dissappear under the floods. Some of the totally affected 1999 villages have been flooded already. Ilisu belongs to the projects which would create the most serious social, cultural and ecological destructions in the Republic of Turkey.Following our call under the hashtag #HasankeyfİçinBirŞey on Saturday evening at 8 pm local Turkish/Kurdish time we and hundreds of people started to do post images, videos and statements in social media. They have sung, played an instrument, painted, drawn, performed poems, did sport and made statements against the destructive Ilisu Dam. The result is a big diversity of performances using art and culture. In few cases people joined manifestations or even organized one. From Kurdish and Turkish provinces many people joined the action day. In the West of Turkey from Ankara, Istanbul, via the Ida (Kaz) mountains, Izmir, Çanakçı and the Menderes River to Mersin there was active participation. People from Hasankeyf and the Tigris Valley, who experience hard times due to displacement, have joined with statements and images the action day. In several places children and young people joined with drawings, instruments and statements which in particular is pleasent. An important solidarity message came from Göbeklitepe, the oldest temple site 225 km west of Hasankeyf, where two people performed Yoga for Hasankeyf. Several people wrote poems for Hasankeyf like students from the Kurdish province Van. Two people, who do documentation in the affected villages for some weeks, shared pictures and videos from one dozen villages in the different provinces. Among them are also graves which will be flooded and no more accessible for the displaced and other people.

The international participation in the action day started one day before in Sydney/Australia with a manifestation. Then it continued with a solidarity action from water activists in Basra/Iraq with whom we share the Save the Tigris Campaign (www.savethetigris.org) for years. In several European places like Catalonia (painting with children), Bilbao/Basque Country, Athens, Bristol/UK (banner at a bridge), Paris (theatre), Frankfurt (joing demonstrations against automobile fair), Berlin, Hannover, Nürnberg (instrument playing) and Hamburg (resistance peom with a link to water) in Germany performances and creative actions have been done.

More than 20 famous Kurdish and Turkish artists joined this action day with statements or even new songs composed and new drawing made for Hasankeyf and the Tigris. Their participation was important to have access to broader circles in Turkey. This was the case in June when a number of artists joined the 3rd Global Action Day for Hasankeyf on 7/8 June 2019. Also several known journalists, politicians and civil society organizations continued to express solidarity on the 15th and 16th September. This shows how much Hasankeyf has become the most moving ecological issue together with the struggle for the Ida Mountains. A special message of solidarity has been sent by activists of the “Conscience and Water Watch” at the Ida Mountain to Hasankeyf.

Some photographer shared their pictures on Hasankeyf and the Tigris Valley which have been shot in the last weeks and many years ago. This comparison shows the dimension of destruction occurred in Hasankeyf. But we have 20-30 times more to rescue as heritage if we can stop the filling by the Ilisu Dam.

After this successful action day we emphasize more than ever: We will continue with our protests in order to prevent the closing of Hasankeyf to the public and to stop of the filling the Ilisu Dam reservoir. We will use the (social) media, but will also be present at the ground along the Tigris River. It is critical that every person and organization rejecting the Ilisu Dam should act now. Write to the Turkish government, organize events and actions, do statements for the press or come to Hasankeyf before 8th October. We need everybody in the public and at the ground!

The Tigris Valley has not been lost yet, there is so much to save. In particular there is a hope to be won for the nature, culture and people. Do not allow to destroy an important the heart of our region in order private companies make more profit and states deepen their policies of hegemony and repression.

It will be never too late for Hasankeyf and the Tigris River!
Hasankeyf is our culture, Tigris our nature!

Note: See our website for images and videos from the performances, outputs and actions of the action day!