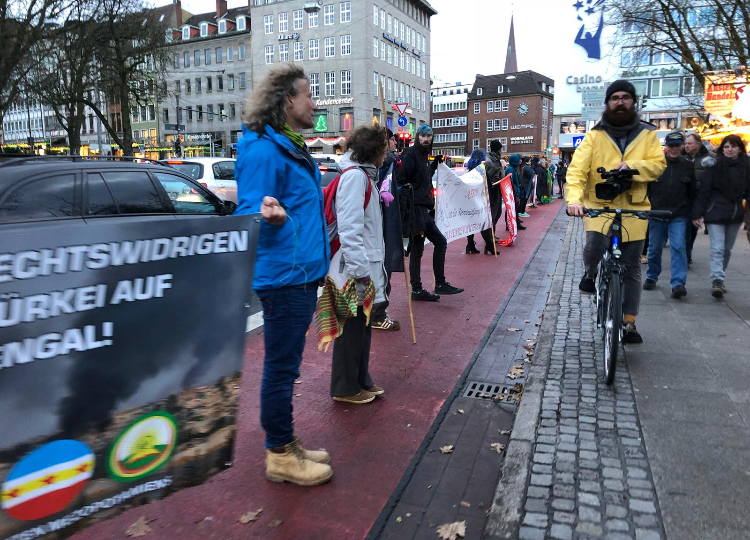 Rojava solidarity activists in the German city of Bremen formed a 1000m human chain in the city centre. The protest was met with general support from the public. The “Rojava Fur Bremen” activist group played a key role in organising the protest.

The action began with a minute’s silence for those who had fallen in the Turkish offensive which is contrary to international law. Afterwards a spokeswoman of the alliance held a speech, in which she reminded of Andok Cotkar (Constantine). The internationalist from Kiel died in the defence of Rojava during an air raid by NATO member Turkey on 16 October 2019 in Serêkanîyê (Ras al-Ain) in Northern Syria. He was just one of many internationalists who have defended and helped build the Rojava’s multi-ethnic revolution.

The protests also highlighted the need for international solidarity with the many peoples struggling for fundamental rights and against oppression across the world.

A spokeswoman for the protests said that:

“Whether in Latin America, the Middle East or West Africa, hundreds of thousands of people take to the streets to fight for a fairer world, for an end to oppression and for their fundamental rights. We stand here today to make their struggles visible and to show solidarity with them. They are not alone. We also stand in solidarity at the side of our Kurdish friends and against the criminalisation of the Kurdish freedom movement. Because especially here in Germany people are repressively approached when it comes to the Kurdish movement”

The protest finished with a performance of the Chilean feminist protest “The rapist is you!” , highlighting the need for international feminist solidarity.