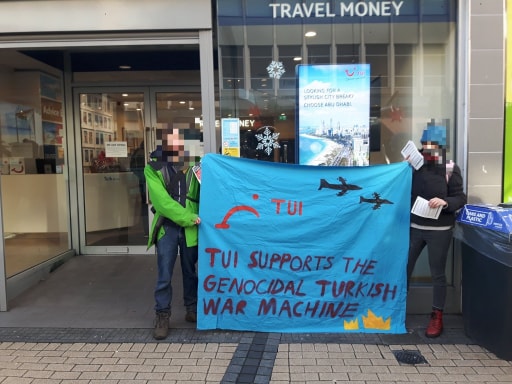 As part of the Don’t Holiday in Turkey campaign, protesters in Bristol picketed their local TUI branch. The company has a large stake in the Turkish tourism industry which has strong ties to the Turkish state.

The protests helped draw attention to TUI’s central role in propping up the Turkish state and it’s genocidal war machine. The tourism industry is not just of major economic importance to the regime, it also plays a key role in whitewashing Turkey’s international reputation.

This is why protests such as this action in Bristol are so important. The Turkish state should not be able to bury its war crimes beneath glossy adverts for Mediterranean resorts. TUI must face consequences for its complicity with a brutal repressive regime.

The key role of the tourism industry in the Turkish economy and the direct influence that people in the UK can have over this means boycotts and protests are more important than ever.