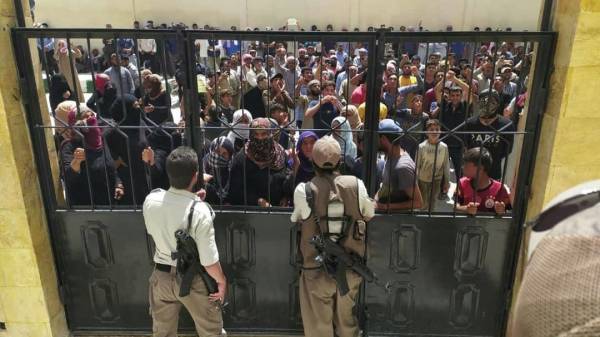 Locals in the Turkish occupied city of Girê Spî (Tal Abyad) and the town of Siluk, have taken to the streets protesting increasing repression by occupation forces. The city has been under occupation by Turkish forces since the invasion of Northern Syria in 2019.

The occupation has taken its toll on the local economy too with rising food prices a growing concern for residents. This shortage of food is directly caused by Turkish forces who have been stealing local harvests and burning fields in the region. Such actions are clearly part of concerted efforts to ethnically cleanse the multi-ethnic region of Northern Syria.

In Girê Spî (Tal Abyad) is home to Arab, Kurdish, Armenian and Turkemen communities. Turkish nationalist policies have long discriminated against non-Turkish ethnic groups especially Kurds and Armenians. The occupation of Northern Syria is just another extension of these brutal racist policies.

Attempts to use food as a weapon in the Turkish state’s war against Kurds and other minorities is not Girê Spî (Tal Abyad). In the past Turkish forces have burnt down and occupied farmland denying local farmers access to crops. Such actions impact the livelihoods of farmers and make food increasingly scarce in the region. More recently Turkish forces burnt down 30 hectares of farmland in the al-Bab region, devastating the local wheat and olive harvests.

Such actions are a clear attempt to starve opponents of the Turkish state and ethnic groups who do not fit into the racist worldview of the nationalist regime. The war crimes could not take place without weaponry from Western states and the money from tourists in Turkey. If you want to stand in solidarity with those affected by Turkish war crimes, take action today.

Click here to learn more about our #StopArmingTurkey campaign.