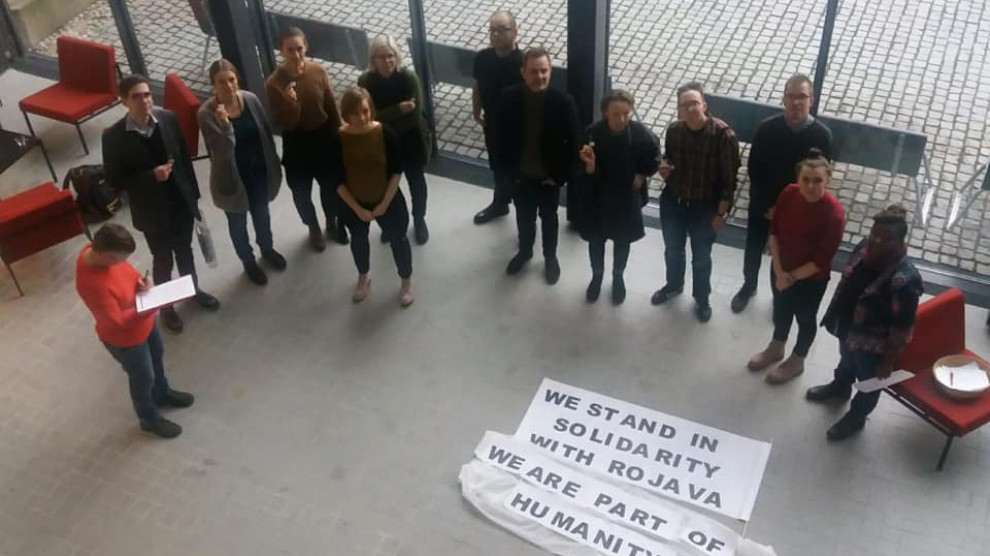 Academics and students from the Gender Studies department of Åbo Akademi in Turku, Finland expressed their solidarity with Rojava before a public event at the university.

They stressed the importance of the Rojava revolution as a beacon of hope and called for global solidarity against the aggression of the Turkish state.

The group’s statement explained why it is vital to fight for “the end of this invasion war and the profiting from it by sale of arms, by Finland and other countries, to Turkey. Let us not make it easy to destroy humanity or each other. Because if today it is Rojava, who is next?”.

They also highlighted the importance of Rojava’s ecological politics. One participant stated that; “In many cultures, life has been symbolised by a tree. In the Nordic mythology, it was called YGGDRASIL, which was the world tree, and under its branches was the most sacred of spaces. This tree was holy and its roots and branches reached everywhere. In Rojava because of the industrial farming and colonialism, the planting of any trees was forbidden up until 9 years ago with the start of the revolution. A tree in Rojava now symbolises “new life” when being planted. Therefore, we have given out little pine tree branches with the tag “I am part of humanity. I stand in solidarity” in our connecting ceremony that we are all part of humanity”.