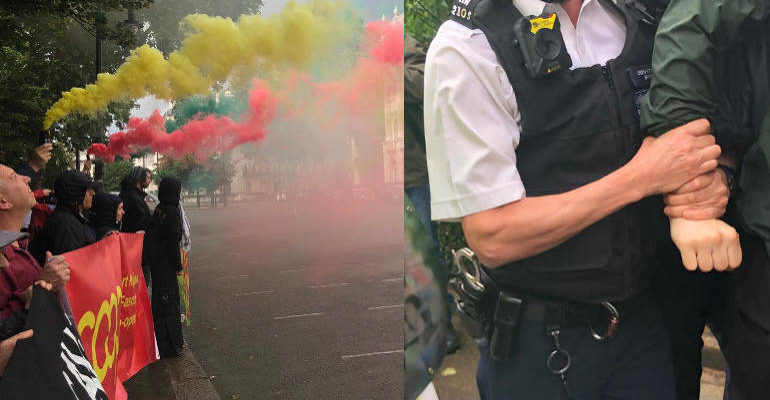 lice reportedly threatened protesters with CS gas outside the Turkish embassy in London on 7 June. They arrested one person, while another had to be taken to hospital.

Around 50 people joined a protest to call on Turkey not to destroy hundreds of majority-Kurdish villages within its borders. The government plans to fill a controversial dam on 10 June, displacing around 78,000 people. The Ilısu dam will flood the ancient town of Hasankeyf. At 12,000 years old, this area of historical Mesopotamia is known as ‘the cradle of civilisation’.

Today we held a demonstration in front of the Turkish embassy, blocking the road and stopping traffic to bring attention to the struggle of the people of Hasankeyf against the Ilısu dam. We represented a range of groups who challenge the right of the Turkish state to enforce a project which has devastating ecological, historical and social consequences.

Armed police looked on as protesters set off smoke flares in the Kurdish colours of yellow, red and green. Protesters also played Kurdish music over a sound system.

Several activists told The Canary that the police used unnecessary force. Canary journalist Emily Apple, meanwhile, attended the demonstration as an activist. The police reportedly assaulted her, and she had to go to hospital. She said:

Protesters blocked the road outside the embassy. One person was violently arrested. In the process, I was threatened with CS gas and thrown on the ground, sustaining ligament damage to my knee. This was a disproportionate and aggressive response from police officers, who seemed intent on aggravating the situation.

A spokesperson from the Metropolitan Police told The Canary:

A protest took place outside the Turkish Embassy in Belgrave Square, SW1 at approximately 14:00hrs on Friday, 7 June. At around 14:45hrs protestors [sic] blocked the road. One man, aged 29, was arrested for public order and assault on police. He was taken to a central London police station. One woman suffered [a] leg injury during the incident and attended hospital for treatment. The protest concluded at approximately 16:15hrs.

7 and 8 June mark this year’s Global Day of Action for Hasankeyf. Demonstrations have taken place all over Europe, including in Pisa, Hamburg, Nantes and Vienna.

Demonstrations will continue around the world on 8 June.

First published by Eliza Egret in The Canary

This article was updated at 09:35 on 8 June to include a statement from the Metropolitan Police.