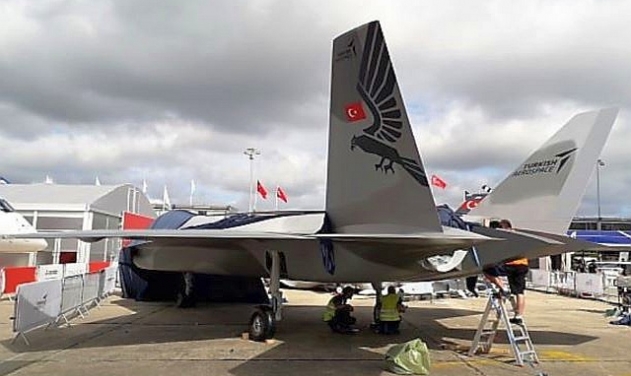 Turkish Aerospace Industries (TAI) uncovered the full-size mock-up of its TF-X jet at the Paris Air Show 2019 today at a time when it is facing possible expulsion from the F-35 program over the S-400 row with the United States.

The aircraft mock-up looks inspired by the F-35 and has several design cues to suggest so. However it has twin-engines compared to the American jet’s single engine.

TAI’s broad timeline for the first flight is 2023. The Turkish government has earmarked an initial investment of 4.817 billion liras (U.S. $1.178 billion) on the conceptual design phase of the TF-X program, a government source had said in early 2018.

Meanwhile TAI has selected or is in the process of selecting vendors to supply various key components of the new jet.

Turkey and the United Kingdom signed a MoU during President Recep Tayyip Erdoğan’s visit to the UKon May 13-15, 2018 to develop the national fighter jet, preliminarily designated as TF-X. BAE Systems and Rolls Royce are expected to partner with TAI in developing a twin-engine jet.

In addition that TAI has selected the 3DEXPERIENCE software platform of Dassault Systèmes of France to accelerate the development of the TF-X aircraft.

Turkey’s Kale group launched a joint venture with UK’s Rolls-Royce to develop and manufacture engines for fighter jet TF-X that is being developed locally. The engine is supposed to be modification of the EJ-200 engine which powers the Eurofighter 2000.

However, if Turkey’s relations with the US worsen over the S-400 issue, then it will have a bearing on its cooperation with Western European suppliers such as Rolls Royce.

In that case it may look at Russia as a possible engine source.

Russia’s Rostec has expressed interest to supply an engine for the TF-X which in all probability could be the Izdelie 30, the ‘second stage’ engine for its own Su-57. The engine, whose first flight test happened in end-2018, can fly in super-cruise mode.