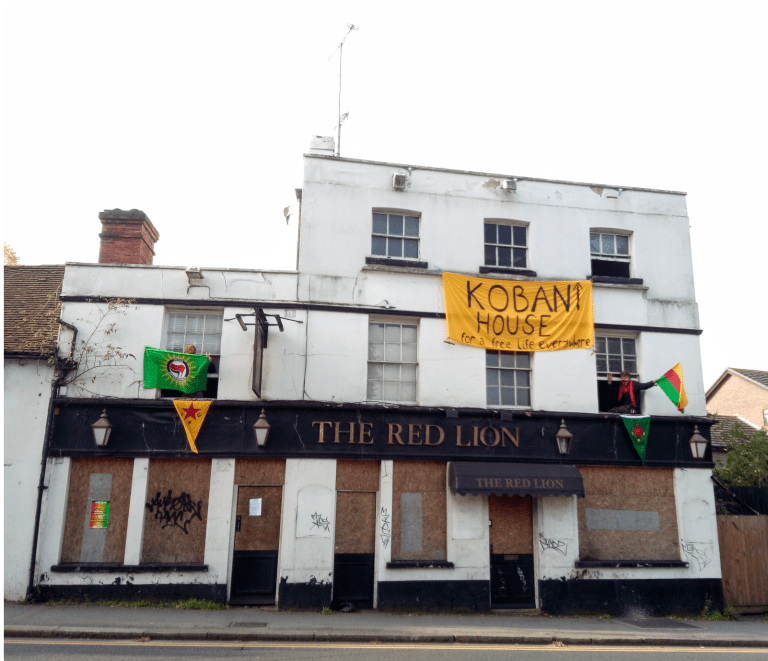 The closed Red Lion pub in Reading was reopened and renamed ‘Kobanî House’ in solidarity with Rojava. The pub, located at Southampton Street, is currently occupied by a group of people and will be run as a social and political space.

One of the occupiers said: “In solidarity with the Kurdish Freedom Movement we decided to open this building to temporarily create an educational and social space for people to learn about the revolution. We have been tidying up and hope to make Kobane House a welcoming place for anyone to visit.”

The Turkish invasion of North-East Syria, a region known as Rojava, began on 9th October 2019 and is a violation of international laws. There are serious concerns that Turkey intends to ehnically cleanse the area. Earlier in October, there were reports that white phosphorous, an internationally banned chemical weapon, had been used against civilians in the region, after images and videos of badly burned, screaming in agony, children have emerged.

The UK benefits from the arms trade with Turkey. In January 2017, British company BAE Systems signed a deal worth more than £100 million to develop new Turkish fighter jets. Amnesty International and other international human rights organisations condemned the high rates of civilian deaths due to Turkish airstrikes in the region.

“The recent invasion of Rojava by the fascist Turkish state has made the need for international solidarity even more crucial. European countries, especially the UK, France, and Germany, are funding this genocide by entering into multi-million pound military trade deals with Turkey,” said one of the Kobanî House current residents, “Continuous war is a method of accumulation by the capitalism system that profits from competition within the inter-state system. This callous logic forms part of the fabric of life under capitalist hegemony. The Kurdish women’s movement has taught us that because this mindset has become embedded within all of us ideological self defense is the most important form of self defence. We must commit to developing every aspect of ourselves to unlearn what capitalism and patriarchy has created us to be.”