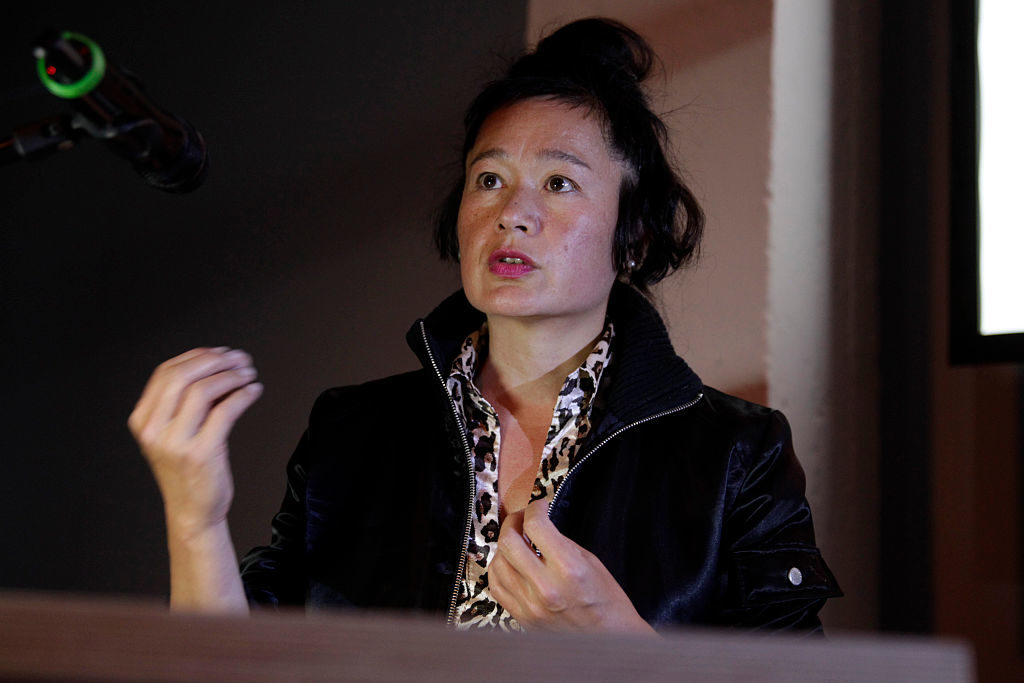 The artist Hito Steyerl has denounced the German government for complicity in the plight of Kurdish people in Northern Syria. Steyerl says she does not want her work shown by Federal German institutions as part of its external cultural diplomacy until the government condemns Turkish aggression and its use of refugees as bargaining chips.

The activist-artist made her dramatic protest as Turkey threatens to resume its military campaign against Kurdish fighters in the Turkish-Syrian border region. Steyerl joined the actor and theater producer Anina Jendreyko, Kurdish filmmaker and musician Heja Netirk, and the political scientist Bilgin Ayata to present a poignant performance at Berlin’s Maxim Gorki Theater on Saturday, October 26. (The theater has posted a full video of the artistic protest online.)

Steyerl also criticized Germany’s role in the European Union’s pact with Turkey to control the number of refugees reaching Greece. The Turkish president is now planning to move nearly a million refugees, many of whom are Kurdish, from Turkey into a “safe zone” in Syria.

“Until the German state changes its position, I am demanding that federal state institutions stop showing my work held in their collections as part of its external cultural diplomacy,” Steyerl said in the presentation. “I am sick of my work being deployed to detract attention from the German state’s tacit agreement with displacement, ethnic cleansing, and warfare, and to lend it an aura of tolerance and inclusivity.”

Earlier this month, Turkey launched a military offensive in Northern Syria after the US withdrew its troops when US President Trump abruptly abandoned the Syrian Kurds, the US’s former ally in the fight against Islamic extremists.

Steyerl and the three other performers describe the situation as a war against the Kurdish people who reside in the region. They imply that the EU-Turkey refugee pact has left Europe vulnerable to intimidation, and that it is preventing sanctions against Turkey. The agreement, signed two years ago and brokered by the German chancellor Angela Merkel, means that Turkey has taken back migrants who reached Europe. In return, the EU pledged €6 billion ($6.6 billion) to Turkey to house refugees in camps.

The 12-minute piece includes a speech and role-playing, and a poignant song forms its finale. The four women alternate between acting as refugees, German politicians, and themselves while moving between speaking German, Kurdish, and English. Called “Women for Rojava,” after the self-declared independent Kurdish region, the presentation is particularly scornful of Germany and Turkey’s mistreatment of refugees. It also condemns the German government’s involvement in propagating violence there, either by inaction or by the nation’s weapons trading.

Steyerl’s practice often includes commentary on corporate globalization, inequality, and surveillance capitalism. She has been vocal in protesting weapons manufacturers and has been a strong voice in the ongoing debate over whether corporations and individuals with unethical sources of funding should sponsor art initiatives.

The presentation was a part of the fourth Berlin Autumn Salon, which runs until November 17 at the Maxim-Gorki Theater in Berlin.

Note: An earlier version of this article incorrectly stated that Steyerl did not want to show her work in any German institutions that received federal funding. This has been updated.