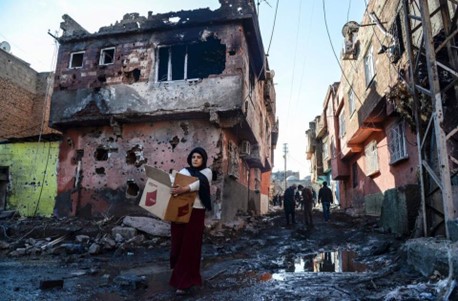 On November 16th, Scotland’s football team is due to play Turkey in a friendly game at Diyarbakır stadium in Turkey’s south-east, the north of Kurdistan, in the region’s biggest city. The stadium is home to two local football teams; Diyarbakırspor and Amedspor. The latter team changed its name in 2014 to reflect the Kurdish language name of the city, Amed, and received a fine from the Turkish football federation for doing so.

In Turkey, the Kurdish people are the country’s biggest ethnic minority at around 20% of the population. They have faced generations of genocide, and every part of Kurdish identity, culture and language is attacked. Today, there are around 10,000 Kurdish political prisoners in Turkish prisons.

he Turkish state is attacking all left wing social movements in Turkey as well as the Kurdish people as a whole. The state is also drone-striking, bombing and gassing the guerrilla in the mountains and assassinating civilians and defense forces of the revolutionary autonomous area of Rojava / North-East Syria, which is putting the Kurdistan Freedom Movement’s anti-imperialist, revolutionary socialist principles into practice.

This game highlights the continuing gentrification and colonial development of a city that has resisted ethnic cleansing.

“We believe Diyarbakır’s current peaceful environment both within the country and internationally will be highlighted. This is a very important move towards promoting tourism and will be highly beneficial for our city.“

This so-called “peace” is the enforced quiet from bloodshed of the young people of Diyarbakır and the mass criminalisation of the population, including the team Amedspor, which has faced more charges than any other team in Turkey.

More than 40 years of an organised resistance movement across north Kurdistan / South-East Turkey has existed despite brutal decades of military and state repression. During the 1980s, the infamous military coup brought severe restrictions on society, leading to the imprisonment of almost half a million people across the country. A harshly enforced ban on non-Turkish cultures and languages was extended in both private and public life, with thousands of Kurdish people imprisoned and attacked for speaking their language and many dying from torture in Diyarbakır prison.

In the 1990s, more than 3000 predominantly Kurdish rural villages throughout the region were burned to the ground by the state military, causing hundreds of thousands of displaced people to seek refuge in cities like Amed, in particular the old section Sur.  Sur carries thousands of years of history: the famous city walls – shown on the crests of both Diyarbakırspor and Amedspor football teams – were originally built 4000 years ago and expanded to their current form in Roman times.

After the mass displacement of the 90s, previously rural families – many of whom had loved ones active in the liberation movement, radicalised by the brutality of Turkish security forces – now lived in urban areas. Collective ways of life and the feeling of resistance against persecution was still strong. Neighbourhood assemblies and local democracy flourished. The roots of this had existed in Sur for millennia: Since the ‘90s, mutual aid and solidarity among neighbours expanded and became structural, replacing the state as the recourse to provide for the community’s needs as a clear political intention.

Between 2013-2015, the Turkish state and the PKK (the Kurdistan Worker’s Party, who founded the guerilla movement) underwent a ‘peace process’ to end the decades-long war. The process disintegrated. Brutality by the Turkish military and police increased across the entire region. In the second half of 2015, young people in Amed dug trenches to stop military vehicles from encroaching on their neighbourhoods and erected barricades to defend themselves from attack and arbitrary detention. Autonomy was declared in Sur, Amed and other cities across the region. The state responded with a siege: the longest in Sur was 103 days, officially ending in March 2016, but there were many shorter curfews.

In Sur, hundreds of local people took defensive positions and were killed. It is impossible to distinguish in every case whether the young people were civilians or militants – and what this distinction truly signifies when people defend their own homes and neighbourhoods from destruction. Around 5,497 families (estimated around 30,000 people) fled the area and at least 7 children were killed in Sur. In Cizre, another Kurdish city in the south-east region, hundreds of civilians were burned to death by security forces when sheltering in basements.

During the curfew, Amedspor played against Fenerbahce in February 2016. In protest, the players stood still for 30 seconds at kick off and fans held a banner saying “don’t let children die – let them come to matches”, a phrase that had been recently banned by the Turkish sports federation after it was chanted at previous games. Hundreds of the team’s fans were water-cannoned by security forces. The same day elsewhere in the city, a 17 year old boy was shot in the head and killed by state security forces at a protest against military repression.

At least one third of Sur was destroyed. At the end of the 103 day siege, the state issued a decree to expropriate 82% of the neighbourhood’s land. The government gave contracts to the company TOKİ to develop what some estate agents now call “luxury villas” in the place of the demolished homes, sold at extortionate rates the previous owners can rarely afford.

Now, residents of Sur and Bağlar – another neighbourhood in Diyarbakır – continue to face high harassment by military forces. It is normal to see armoured vehicles with mounted turrets rolling through town. Checkpoints are spread throughout the city, as well as throughout the entire region. Military outposts peer down from atop the hills and mountain sides of the previously inhabited villages.

The ruling national party of Turkey is the AKP. In the last elections, in both 2018 and 2019, HDP (a left wing and Kurdish majority party) won seats across Amed/Diyarbakır and much of the south-east. They were instantly deposed by force. Local HDP mayors were arrested and unelected AKP “trustees” were put in their place in a local coup.

In 2014, Amedspor changed their name to reflect the Kurdish language name of the city from Diyarbakir to Amed and received a fine from the Turkish football federation for doing so. The AKP controlled municipality told Amedspor to change its name, or else funding would cease – a condition that no other football team in Turkey faces.

Mainstream media in the West and Turkey brand the Kurdish movement “separatist” and “terrorist”.  Yet, the Kurdistan freedom movement does not call for an independent state. They call for a de-centralised democratic system that centres women’s liberation, ecology, ethnic pluralism, organised on principles of autonomy. Local organisations demand the right to educate children in their own language and for cultural practices to exist without imprisonment or attack.

The opposite has been granted. Turkey hosts 95% of Europe’s prisoners convicted of terrorism – frequently used against Kurdish politicians, women’s rights organisations, journalists, unionised workers, lawyers, the grieving mothers of young people killed by security forces, and even people who make critical social media posts about the Turkish government.

Previous Amedspor player Deniz Naki, who played as an attacking midfielder, was banned for life in 2018 from playing football in Turkey after a series of court cases. In February 2016 (still during the period of the siege), he dedicated the win against Bursaspor to the people who lost their lives at the hands of state forces, leading to an exclusion from 12 matches, a suspended prison sentence, and a massive fine. Two years later, he received the permanent ban after a Turkish court sentenced him for terrorism related offences over social media posts.

This is not “peaceful”. The war has not ended in Amed/Diyarbakır or across the region. This is an ongoing attack, from filling prisons and military intimidation to soft power methods such as expanding tourism and defunding the widely supported local football team. Whitewashing an area with a flood of capital and international media won’t disappear the bloodstains, despite the effort of the colonial government.

In September 2022, six Amedspor fans were arrested at Diyarbakir stadium for flying the Kurdistan flag, chanting, and wearing T-shirts memorialising Kurdish woman Jîna Mahsa Amini. Jîna’s murder at the hands of Iranian security forces in Tehran catalysed a monumental uprising in Iran for women’s liberation and an end to the Islamic regime. The same month, 19 fans had charges pressed against them for not standing during the national anthem.

Amedspor members and fans are not only targeted at home, but also by assassination attempts and attacks from far-right fans across the country. The team’s treatment by the state and the nationalist right-wing reflects the attitude towards Kurdish people and liberatory politics as a whole.

Scotland v Turkey should be condemned for what it is: an extension of the state’s assimilation policies and an attempt to bury the struggle for freedom.

The so-called UK government encourages domestic defence industries to partner with Turkish militarism. Their geopolitical partnerships will never pave the way to freedom, in Europe or the Middle East.

Boycott the game and Turkish tourism.

In solidarity with the imprisoned.