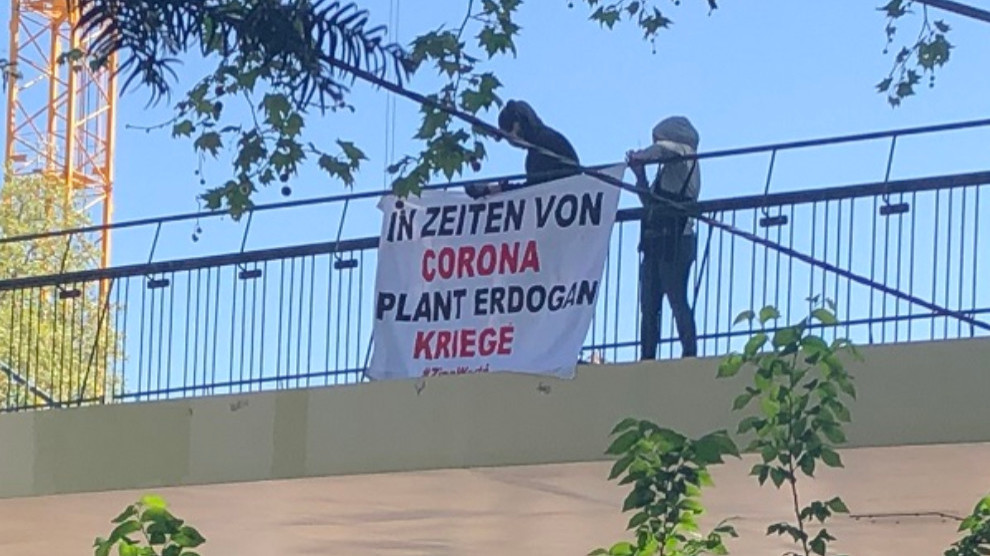 Activists across Europe have protested Turkish military operations in Southern Kurdistan (Iraq). The attacks have received attention for their brutal violation of human rights with many civilians coming under bombardment.

Despite the threat of Coronavirus activists have continued to protest the Turkish state whilst making sure to follow medical advice on social distancing and the wearing of masks, as much as possible.

Speaking here, Die Linke (Left Party) Berlin State Deputy Hakan Tas pointed out that the Turkish state’s attacks on Kurds increased at a time when the world is mobilizing to fight the coronavirus.

Similar protests took place in the cities of Hildeshim, Nuremburg, Frankfurt and Esslingen. Protesters took to city squares to condemn the violence of the Turkish military.

In Freiburg, a press statement from various Kurdish activists was read out at the Alte Synagoge. The statement condemned; the fascist Turkish state’s attacks on Kurdish values ​​in all parts of Kurdistan, especially Rojava and Bashur, and the KDP betrayal.

Meanwhile, in Stuttgart activists hung a banner on an overpass, which read “Erdoğan plans wars in times of Corona”.

Activists in cities across France also organised protests against the war crimes of the Turkish state and its illegal incursions into Southern Kurdistan.

In central Paris and the Suburb of Villeneuve-Saint-Georges Kurdish activists condemned the attacks launched by Turkey in South Kurdistan and the complicity of the KDP regional government.

Protests in Toulouse also condemned the attacks and took to acts of civil disobedience as part of their protests.

Similarly, in Marseilles activists blockaded roads to protest the Turkish military operations and the failure of the International community to hold the regime in Ankara accountable.