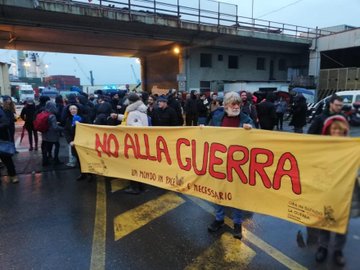 Dockworkers have continued their strike in the Italian city of Genoa. The strike is a refusal to load weapons in the port of Genoa, including arms destined for Turkey’s illegal military actions in Syria and Iraq.

Workers took a similar action prior to the 18th of February when a Saudi ship docked at the port to load arms to be used by the Saudi military.

Activists in both Vienna and Zurich held protests in solidarity with the Genoese dockers. Showing that wars in Yemen, Kurdistan and elsewhere can be disrupted if we attack the logistics of the arms trade.

This also shows the important power of trade unions and workers in disrupting the arms industry and its complicity in enabling the violence of dictatorships like the Turkish state.