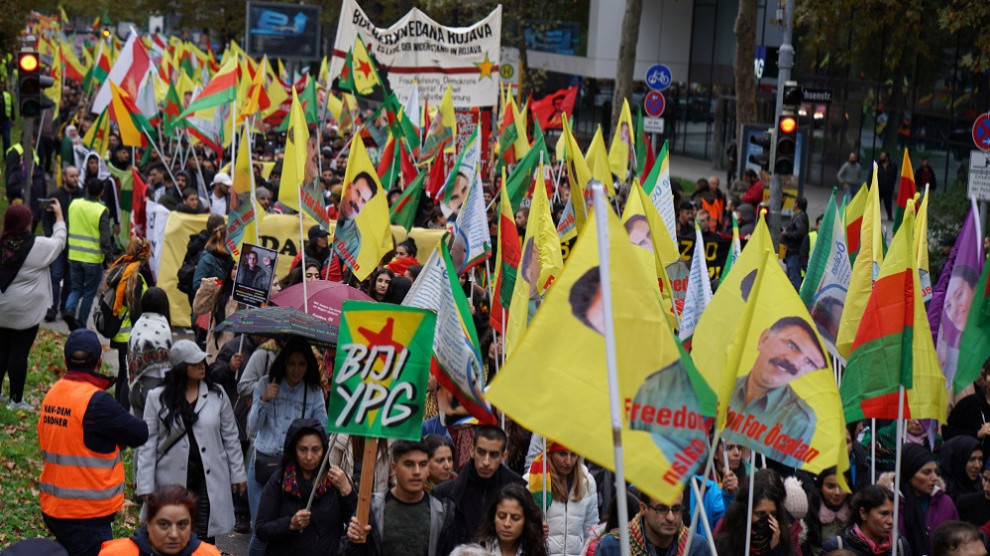 A combined statement by the #Riseup4Rojava, #WomenDefendRojava and #DefendRojava campaigns has called for an international day of action in solidarity with Rojava on the 14th of December.

The combined statement by the groups explained why this day of action is so important in supporting the peoples of Rojava against Turkish fascism:

“The war of aggression started by the Turkish army and its jihadist allies on 9 October 2019 against the Democratic Federation of Northern and Eastern Syria, brought with it a phase of global solidarity and resistance. The past weeks have made it clear to us all that the resistance of the peoples of Northern Syria is inseparable from the global struggle against patriarchy, fascism and capitalism. Around the world, millions of people protest against social justice and capitalist exploitation. The protests of Chile, Bolivia, Colombia, Lebanon, Iraq, Iran, Tunisia and Catalonia are united by the call for a world of social justice.

It has been shown that without smashing fascism in Turkey no democratic achievements in the other parts of Kurdistan as well as in the Middle East can be secured. Until recently, North and East Syria was an oasis of stability in the country.  Under the Democratic Autonomous Administration (DAA) of North and East Syria, 5 million Syrians of various ethnic and religious backgrounds – Kurds, Arabs, Christians (Armenians, Assyrians, Chaldeans, and Syriacs), Turkmens, Chechens, Alevites, and Yazidis – peacefully coexisted.

On one hand it was and is the resistance of the fighters of the Syrian Democratic Forces (SDF) and the self-defense fighters of the YPG and YPJ who forced the Turkish fascist state and the international powers to limit the Turkish aggression with so-called agreements and cease-fires. And on the other hand, it was the hundreds of thousands of people in countless cities worldwide who formed a bridge of hope to Rojava.

The international policies against Rojava – be it the direct war policy of Turkey, the indirect support by the USA, Russia and the EU or the ignorance of international organizations like the UN – show that there is an international coalition against the revolution in Rojava, which aims to destroy the hope for a better world, which is created through the new alternative democracy in North and East Syria/Rojava and preserve the status of international colony of Kurdistan.

The construction of a system in Rojava based on radical democracy, women’s liberation and ecology is a historical step for the revolution in Kurdistan and the democratization of the whole Middle East. This victory captivated the world and marked a new beginning for the oppressed peoples of the region, who built a system of self-governance that gave a voice to all of the region’s communities. The international solidarity with Rojava shows that the struggle for liberation is international and boundless!

The mass extermination campaign of the fascist Turkish regime continues unabated. It expresses itself by thousands of political prisoners, the destruction of world cultural heritage, nature and Kurdish cities, forced administrations, the de facto abolition of the right to vote and the attacks and ethnic cleansing, on Rojava. These attacks take place with the support of the international community of states. The peoples of North and East Syria continue to challenge us with their resistance to defend the revolution and make it the cradle of global democracy.

With this in mind, we call for an international day of action on 14 December 2019. Let us carry our anger together against the Turkish war of aggression, on the streets and public squares. Let us break the state of normality. As long as the killing continues, the resistance must continue.

Solidarity with the worldwide people’s resistance!

Together against fascism and patriarchy!”