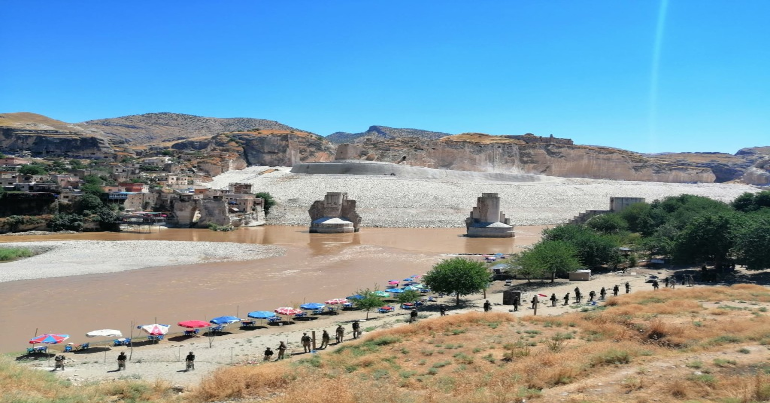 The construction of the Ilısu dam in southeastern Turkey threatens to displace 78,000 people and destroy one of the oldest continually inhabited places on earth.

Turkey wants to fill the dam’s reservoir as soon as possible. But campaigners say international solidarity action is delaying the process. The dam is being built by international and Turkish companies in Bakur – the part of Kurdistan within Turkey’s borders. And as The Canarypreviously reported, the filling of the dam would see hundreds of majority-Kurdish villages submerged under water, literally wiping them from the map. Among these is 12,000-year-old Hasankeyf, which has thousands of neolithic caves and hundreds of ancient monuments.

The Initiative to Keep Hasankeyf Alive (ITKHA) called for global actions against the dam on 14 July. The event was dubbed the ‘Big Jump’. The ITKHA called on international activists to come to Hasankeyf and symbolically jump in the Tigris river. The ancient town of Hasankeyf will be flooded if the dam is completed.

The governor for the area, however, was not prepared to allow even symbolic protest against the dam to take place. He announced that protests would not be allowed without permission. And police soon lined the banks of the Tigris river to prevent people from jumping in the water.

The ITKHA, along with deputies and co-mayors from Turkey’s People’s Democratic Party (HDP), made speeches at the protest. Many international activists joined them, including a delegation from Wales and England. Labour MEP Julie Ward attended the protest and made a speech.

One of the delegates from Wales told The Canary:

On our way in to Hasankeyf, we were all searched. We eventually got through to a cafe on the banks of the Tigris [where the ‘Big Jump’ was to take place]. There were 100-150 police and army who surrounded us by the river banks. But the resilience of all the people [at the protest] made me feel comfortable. Some activists, including members of the HDP, negotiated with the police and Julie Ward helped. The ridiculous image of the armed police spread out down the river next to the cafe’s parasols will stick with me.

The police wouldn’t allow the ‘Big Jump’ to take place in Hasankeyf, so the activists decided to travel 50km to the Batman river to carry out their action.

The ITKHA also called on international activists to organise their own ‘Big Jumps’. According to a statement from the initiative, activists held solidarity events in Germany, Catalonia, Italy, Britain, Switzerland, Brazil, Iran, Bosnia, Iraq, and the US.

Activists also held solidarity actions all over Turkey and Bakur against the dam. The ITKHA saysthat this growing local support is crucial to the campaign against the dam.

‘It’s not too late to save Hasankeyf’

The campaign against the Ilısu dam has been ongoing for over 20 years. But the coming weeks and months are critical for the region. The ITKHA says this is the beginning of a final push to save Hasankeyf:

One very important slogan of the successful Big Jump action day was “It is not too late for Hasankeyf”! With this [we] express that it is never too late to stop the Ilisu Dam which would destroy the 12,000 year old town… flood the Tigris valley with its rich biodiversity and destroy the livelihoods of up to 100,000 people in the Kurdish region of Turkey… This action day is an expression that the activities in the next weeks and months against the destructive Ilisu Dam and for the defense of Hasankeyf and the Tigris river will continue.

The fact that riot police prevented a group of protesters from symbolically jumping in a river shows the oppressive environment that the ITKHA has to face. If the struggle against the social and ecological catastrophe the dam represents is to be successful, they will sorely need our voices and our solidarity over the coming months.

Featured image via the Initiative to Keep Hasankeyf Alive

First published in The Canary