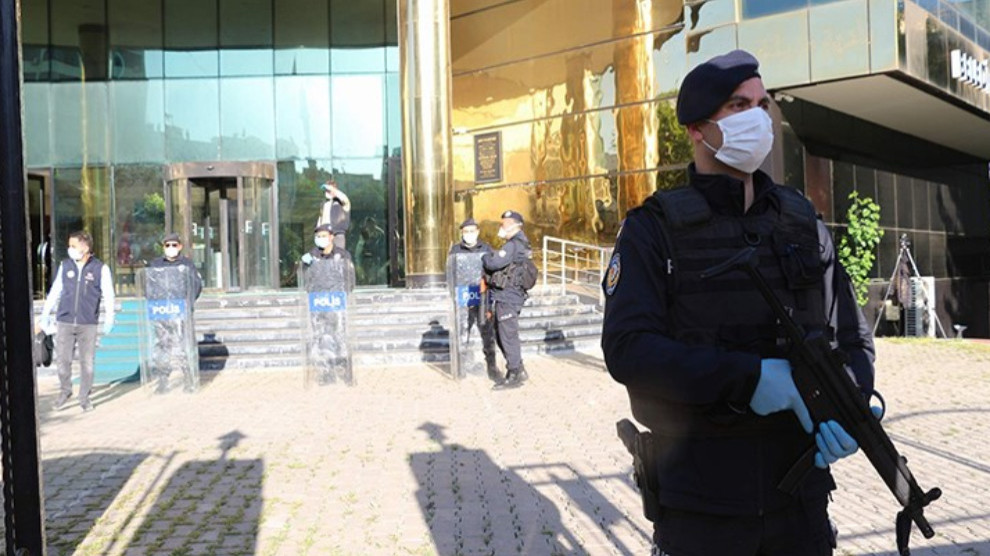 Five more municipalities in Turkey, held by opposition parties, have been undemocratically seized by the AKP-MHP government. The municaplities’ democratically elected representatives have been replaced by unelected ‘trustees’ chosen by the regime. All five municipalities had originally been won by the HDP party in 2019 local elections.

The seized municiaplites include; the cities of Siirt and Iğdır, and the districts of Kurtalan, Baykan, and Altınova.

The seizures occurred without any formal legislative, electoral or judicial process, revealing the bare faced anti-democratic and authoritarian nature of the Turkish state.

Since the HDP has consistently opposed the regime’s authoritarian measures, racist policies against Kurdish people in Turkey and military operations in the region; they have faced an increasingly harsh crackdown by the government.

It is no coincidence then that the municipalities seized by the regime were all in majority Kurdish populated areas. Moreover, the seizures happened on the 15th of May which is globally recognized as Kurdish language day. These seizures can be seen then as a continued effort to deny Kurdish peoples political or cultural self-determination. These attacks on democracy on basic political rights underline the authoritarian nature of the regime in Ankara.

The HDP has released a statement condemning the seizures, which highlights how the Turkish state has exploited the Coronavirus crisis to accelerate its attacks on democracy and Kurdish peoples’ rights. The statement also highlights how this is not the first time that such seizures have taken place. This means that, at the time of writing, a total of 45 HDP municipalities have been seized by the state. Meanwhile, many HDP MPs and party members have faced similar measures.

Feleknas Uca and Hişyar Özsoy, Co-spokespersons of HDP’s Foreign Affairs Commission, released a statement on the Turkish regime’s seizure on Friday of five more municipalities won by the HDP in the local elections of 31 March 2019.

Full text of the HDP statement reads as follows:

“In a previous statement (24 March 2020) on seized HDP’s municipalities, we underlined that the Turkish government has not suspended its evil anti-Kurdish policies even under the conditions of a global pandemic. Quite the contrary, the government is using the pandemic as an opportunity to further repress Kurdish democratic institutions, their municipalities in particular. This does not only undermine local democracy and the political will of Kurdish people, but also destroys their already weak social and health infrastructure, making them even more vulnerable to the pandemic.

On March 23rd, the government did unlawfully seize eight HDP-run Kurdish municipalities. Less than two months later, on May 15th, that is, on the day of Kurdish Language Holiday, five more Kurdish municipalities were seized. These include Siirt, Iğdır, Kurtalan, Baykan, and Altınova, the first two being city municipalities, and the latter three district municipalities. Turkish police have surrounded the municipalities with barricades; our mayors were detained in violent early-morning house-raids, and replaced with the so-called “trustees,” which we view as colonial officers. Including those seized today, Turkish government has so far appointed trustees to a total of 45 HDP-run municipalities since the 31 March 2019 local elections, when HDP won a total of 65 municipalities. Additionally, 6 HDP co-mayors who had won the elections were denied their election certificates with the excuse that they had previously been dismissed from their jobs by emergency rule decrees. That makes a total of 51. As of today, 21 Kurdish co-mayors elected in March 2019 remain behind bars and five of them are under custody. And dozens of our mayors previously elected in 2014, too, have been in prisons.

Just like in the previous cases, there is of course no court decision for these new detentions and trustee appointments. These are all administrative measures of the Minister of Interior. The charges raised against our mayors are typical – “supporting terrorism.” Needless to say, it should be clear to the international community by now that these are groundless accusations exploited to justify destruction of democratically won Kurdish municipalities.

As we emphasized before, we are fighting against two viruses simultaneously – COVID 19 and racist authoritarianism against the Kurds and their democratic will – both being severe public health issues.

Once again we call upon the international community, the Secretary General of the Council of Europe, the Congress of the Local and Regional Authorities, and the Committee of Regions of the EU in particular, our sister parties and all friends of democracy, the HDP, and the Kurds to raise their voice and take action against these racist policies of Turkey’s government which is trying to establish the “trustee-regime” as “the new normal” in the country.”