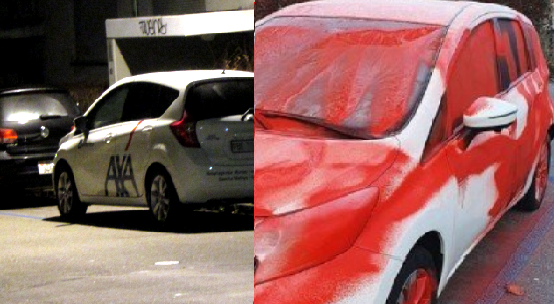 Activists in Bern, Switzerland took action against the French insurance company AXA for the company’s links to the Turkish state.

Activists threw red paint over several AXA company cars to highlight how the corporation is complicit in the atrocities of the Turkish state.

They noted how comapnies like AXA, Credit Suisse, Mercedes and Rheinmetall are at the heart of Europe’s tacit support for the brutality of the Turkish state.

“One of the three largest players in the Turkish insurance business. With long-term and well-known investments in the Turkish arms manufacturers Aselsan and Vestel, AXA is also directly involved in the Turkish defense industry. Last but not least, AXA has a decades-old strategic partnership with OYAK, the little-known but all the more influential backbone of the Turkish military-industrial complex.

OYAK, the Turkish officers’ pension fund, was installed immediately after the first military coup in 1961 and has since been a powerful tool in the powerful hands of the Turkish military. The fund owns a good 60 Turkish companies and participates in numerous others (negotiations are currently underway to take over the bankrupt British steel giant British Steel), making it one of the three heaviest players in the Turkish economy. Protected by tailor-made legislation and led by members of the Turkish army, OYAK uses its bubbling profits to grant members of the army economic privileges (primarily pensions and houses) that make a significant contribution to ensuring their loyalty.”

This means that AXA profits from and economically supports the violence and ethnic cleansing carried out by the Turkish state and military.