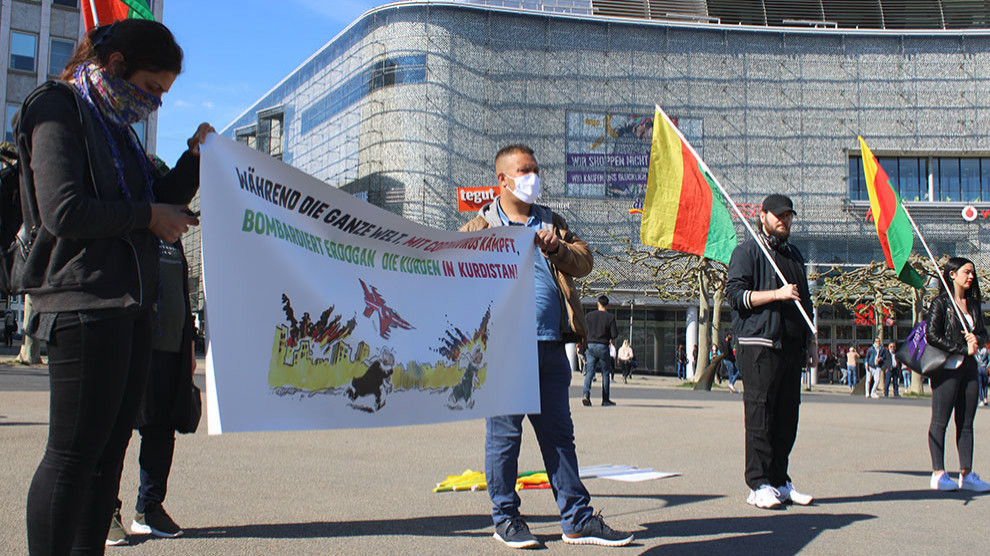 Across Europe, civil society, politicians, activists and Kurdish community groups have continued to condemn the Turkish bombing of the Mexmûr refugee camp. The continued embargo of the camp by the KDP regional government in Iraq has also faced strong criticism. The attack by Turkish military aircraft left three dead and drew international condemnation.

In Strasbourg, Kurdish youth movement activists hung banners from a bridge to protest the attack and the Turkish state’s continued military operations in Southern Kurdistan (Northern Iraq). Activists made sure to protest in a way that followed current advice regarding Coronavirus.

Activists in Bern took similar actions in protest against both the attack on Mexmûr and attacks in the Zinî Wertê region.

Meanwhile, in Kassel Germany protests took place condemning the bombing of Mexmûr as well as the KDP’s 10 month long embargo of the refugee camp. The embargo has become a matter of increasing importance as the camp’s residents require access to medical support in the face of Covid-19.

Civil society groups in Germany have also moved to condemn the bombing and the embargo. Civaka Azad (Center for Kurdish Public Opinion Studies) organised a panel of civil society groups and human rights defenders on the 7th of May relating to the attacks on the camp.

The panel saw speeches from Kurdish human rights associations, residents of the camp and members of the German Die Linke political party.

Similarly, the issue of continued Turkish military aggression was raised in the Swedish parliament by Socialist MP  Amineh Kakabaveh. In response, the Swedish foreign minister Ann Linde recalled her support for a renewed peace process in Turkey and the need for Turkey to follow international law regarding the protection of civilians during military operations.