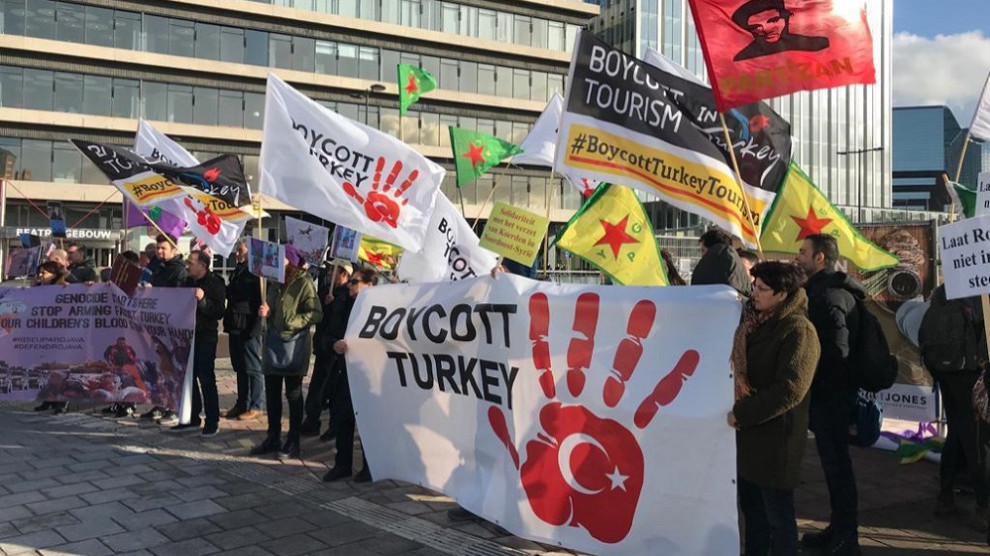 Recent air strikes by the Turkish military in the area of Northern Iraq known as Shengal (or Sinjar in Arabic) have prompted a wave of protests across Europe.

Such air strikes have occurred before and often target Kurdish political groups including fighters who defended the Yazidi community in the area against ISIS’ genocidal attacks. Such attacks have received criticism in the international media especially when they have targeted Yazidi areas affected by the ISIS genocide.

In Sweden protests took place in both Stockholm and Helsingborg. Kurdish community groups and solidarity activists declared their solidarity with Rojava and Kurdish forces facing Turkish state violence. They also condemned the silence of both the Swedish government and UN over Turkey’s aggression in Shengal.

In Stockholm, Azad Aslan from the Söderhamn Initiative said that the Turkish state attack the Syrian Democratic Forces and YPG / YPJ, which defeated ISIS mercenaries in Rojava, and want to destroy the system built on the different identities and beliefs in Rojava.

Aslan emphasized that the resistance will continue until the Turkish state leaves the lands it has occupied.

Activists and Kurdish communities across Germany took action in solidarity with Shengal and Rojava this weekend.

In the city of Bielefield a crowd gathered outside the city’s main train station to march in solidarity with Kurdistan and condemn Turkish aggression in Shengal. Protesters also highlighted the complicity of German arms dealers in supplying the Turkish state with weapons used for war crimes.

Protesters in Nuremburg gathered in Lorenzkirche Square to condemn the international community’s silence regarding the Turkish attacks in Shengal.

In Frankfurt, Kurds held a demonstration at the Hauptwache Square in solidarity with Shengal and Rojava where the Turkish state is waging a bloody campaign targeting the Kurdish people and their achievements.

The attacks carried out by the Turkish state against Shengal were also protested in Saarbrücken, Germany.

The demonstration gathered in front of the Europagalerie. After a minute silence in memory of the martyrs of the revolution, activists handed out leaflets explaining the situation in Northern and Eastern Syria and how Turkey continues to attack the region.

In Utrecht protesters highlighted the importance of the Boycott Turkey campaign as a means to resist Turkish aggression.

Speakers at the action underlined how the Turkish state is targeting the very existence of the Kurdish people and call on the European states to hold on to their responsibility and put pressure on Turkey to end these attacks.

Speaking on behalf of the Greon Links Party, Serpil Ates, reiterated that her party condemned the Shengal attack and added that attacks against civilians could not be accepted.

As for the boycott of Turkish goods and tourism, she asked people to exclude Turkey from their shopping lists and touristic destinations. Ates added that any money transferred to Turkish tourism is returned to the Kurds as bullets, death and cruelty.

Thousands of people joined a demonstration in the city of Marseilles to express their solidarity with Shengal against the genocidal attacks of the Turkish state. The crowd staged a protest march from the Canabierre Square to Vieux Port where a rally was held.

A protest march was held in the capital city of Athens. The demonstration was organised by the Kurdish Cultural Center and Revolutionary Youth Movement and received support from various leftist groups and Kurdish people in Athens. The protest received a great deal of interest from local people in the city

The march in protest at Turkey’s attacks against Shengal kicked off from the Akademia Square and continued till the Turkish Embassy through the main streets of the Greek capital. Demonstrators handed out leaflets to passers-by informing them about the Turkish state’s genocidal war against the Kurdish people.