Turkey is the World’s Worst Jailer of Journalists

After the arrests of four journalists in Turkey, the International Observatory of Human Rights (IOHR) reiterated its concerns regarding Turkey’s crackdown on the press.

Following this news the IOHR noted how “Turkey remains the worst jailer of journalists globally.” The recent arrests were justified through rhetoric by President Recep Tayyip Erdoğan painting his political opponents and minorities such as the Kurds as ‘terrorists’.

It is no surprise then that the Turkish state ranks 157th out of 180 in the RSF World Press Freedom Index. The state faces a universal periodic review of its human rights record by the UN on the 28th of January. The IOHR has suggested that it will raise concerns regarding continued attacks on press freedoms and human rights by Turkey, during this review.

Erdoğan praised the role of the Turkish National Intelligence Organization (MİT) who were central to the arrests of the four journalists. The journalists are associated with Kurdish and left-wing publications and were charged with membership of a terrorist organisation.

It has long been a trick of authoritarian regimes to label their political opponents as terrorists. The South African Apartheid regime used similar rhetoric against activists fighting for racial equality and an end to Apartheid.

The IOHR’s condemnation of Turkey reveals the state’s status as an authoritarian regime which continues to add to its long record of human rights violations. The regime’s attacks on democracy, and the rights of Kurdish and Turkish people alike show why it is so important to boycott Turkey and those in the West who are complicit in the state’s dictatorial practices. 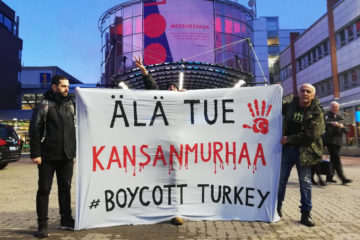 Activists for the Boycott Turkey campaign visited the Nordic Travel Fair in Helsinki to protest the Turkish tourism industry. The Fair is the biggest of its kind in Northern Europe with more than 60 000 Read more… 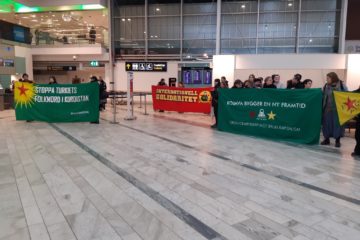 The action took place inside the Landsvetter Airport in Gothenburg, Sweden, as part of the boycott of Turkish tourism. The Turkish occupation of Northern Syria and Rojava was condemned by activists who called on travellers to Read more…

Hundreds of protesters marched in the Greek town of Lavrio on the anniversary of the illegal Turkish invasion of Afrin. The march organised by the Revolutionary Youth Movement was attended by the Kurdish community and Read more…